We were so blessed to be able to spend a couple of weeks with our daughter’s family in Hawaii. You heard about the cliff, but that wasn’t the only adventure. On our last full day on the island we took a hike with Dave. Our target was a bench on a ridge overlooking a valley.

We drove for about two hours and made no extra stops other than to go potty once. We were on a mission and we were mission focused. There was a limited amount of daylight and we certainly didn’t want to be out there at dark. Our mission was so important that I intentionally drove past the best malasadas on the island! We drove out to the north side of the island, taking a rode that wound it’s way through pastures and reached over 3000 feet of elevation. We saw beautiful vistas of the Kona coast. But that wasn’t our mission, so we kept on driving. Eventually we hit the end of the road, high atop a ridge of the Pololu Valley. The easy part was done, now the real task was at hand.

We began the hike by making our way down an old military trail that gradually makes its way to a black sand beach. This trail sees heavy use daily so it is fairly well worn and not to bad other than the steep pitch that it follows. We paused briefly to sample the wild guava that grows along the hill side, but again, this was not our mission, so we trudged on. Next was the beach. Beach is a strong word. It’s not sandy like you would expect. It is mostly rocks worn smooth from the constant action of the waves. It’s beautiful and make the most amazing noise as the water rushes through and clatters the rocks against each other. Once again, not the mission, so we kept on moving.

We finally hit our target trail at the far side of the beach. There it was, a narrow strip of mud climbing into the jungle. It was visible right in front of our feet, but the jungle swallowed it so quickly that it wasn’t visible for more than about 50 feet.

To say that the hill was a struggle is a vast understatement. It was steep and slippery. Several times we had to cling to vines to help us make our ascent. Rocks from a long dormant lava flow jutted out randomly through the muck and foliage. I could see the footprints of previous hikers and took note of a number of long skid marks as someone slid down the hill. There were areas that looked fine, but turned out to be shin deep mud pits. Being in front I called out the dangers. “Rock!” “Mud hole!” “Pig poop!” Yes, pig poop. We were hiking in boar habitat. We could see the areas where they had rooted through the bush looking for food. All of this was exciting, but it was not the mission, so we did our best to avoid the problems and kept on stepping forward. We could hear rain hitting the canopy over our heads, but the jungle was so thick that none of it fell on us. It was just muddy trail, littered with rotting guava, swarming with bugs.

After 30 minutes of this grind, we finally broke through the trees. Fresh air, sky, and no bugs. It was glorious. And then, just over a couple of rises lay our goal. We found the bench that overlooks both the Pololu and Honokane Nui valleys. This was our mission, and it was worth the pain and work.

We spent some time there then reversed our course to get back to the car. The trip back was no picnic. Now, instead of climbing, we had to try to hold ourselves back as we went downhill in the mud. There were far more mishaps on this part of our trip. Eventually we hit the beach, covered in mud from the knees down. My shoes were damaged (I wear Vibrams toe shoes and ripped the big toe off of one of them). Dave’s shoes wear damaged (he wears “slippers” that had a blow out early on, so he made most of the hike barefoot). Bev’s shoes were alive, but filthy. In short, we were a mess! We carefully picked our way over the rocks and down to the water. We were able to clean up fairly well. We felt refreshed. It was great.

By now you may be thinking, “OK MoM, that’s a nice story, but this is a recovery blog, not a travel blog!” (check out whiteroadhike.wordpress.com or paulsbigislandhikes.wordpress.com for my travel blogs!) You should know me well enough to know we’ll bring it around eventually! Recovery is a mission that we are on. We have a goal, which is living a life of recovery (my goal is not sobriety, that is a byproduct of my recovery lifestyle). As we set out on our mission we had a person out in front of us to warn us of the dangers. That point person is our sponsor. They’ve been there before and can let us know when we are about to go over a cliff or step in the poo! And the water at the end? Well that’s what lets us know that even when we walk through mud and yuck, we can still… 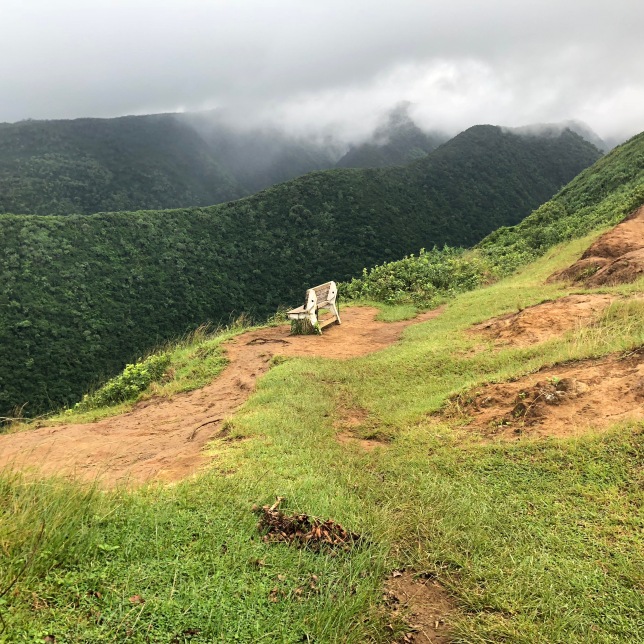